TIME TO CLOSE UP FOR THE DAY...

Hey there it's Rocky. Here is what I see before I close up the shop for the night. I've been seeing this most nights for almost 7 years now. I can't tell you how cool it is to take a look around and see all the bikes in the quiet, alone, with the smell of rubber & leather. It is a pretty cool job!
Posted by Rocky Marks at 5:29 AM No comments: 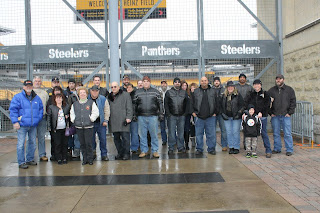 Hot Metal Harley-Davidson’s Mon-Valley HOG Chapter kicked off another year of riding with their annual “FYBO Run.”  FYBO has many meanings, however “Freeze Your Buns Off” is probably the most politically correct and socially acceptable meaning of that acronym.

This year, the Chapter caught a little break from the cold and rode to their destination in their vehicles due to the weather conditions that would give even the most seasoned rider a white knuckled adventure in the snow.  That didn’t seem to put a damper on attendance.

Over 35 people arrived at Heinz Field which was stop #1 on the ride.  The Chapter took a free tour of the home of our beloved Black & Gold.  The tour began at Gate B, walking through the Great Hall where they replayed the immaculate reception and toured through the lockers of some past Steelers such as Jack Lambert, Lynn Swan, and Jerome Bettis.

In addition to strolling down memory lane, the Chapter strolled through the Stadium’s locker rooms, $150,000 suites, infrastructure, and even the press box which is 95% sound proof.  That is significant because there is very little, if any crowd noise.  In the press box there is absolutely no cheering or speaking in an above normal voice.  Doing so will get you an automatic suspension of the press box privileges.

In addition to the catacombs, corridors, and luxury suites, the Chapter got to make their way out onto the field in the same fashion the Pittsburgh Steelers would using their entrance.  Once out on the field, group and individual shots were taken while gaining a perspective that only the players and coaches know during game day.

After the tour of Heinz Field, the Chapter was treated to free play courtesy of the Rivers Casino.  A buffet was available for those who chose to step away from the gaming area and the FYBO ride ended on the North Side in Pittsburgh.

Because the weather is unpredictable at best, the Mon-Valley HOG Chapter will host several indoor events at Hog’s Restaurant on Prospect Road in Pittsburgh.  This will be done in the first couple months of the year so that members can still participate in the chapter should the weather not be so cooperative when a run is scheduled.

If you are interested in joining the Mon-Valley HOG Chapter, you can send an e-mail to monvalleyhog@hotmetalharley.com or go to Hot Metal Harley-Davidson’s website at www.hotmetalharley.com and click on the “Mon-Valley HOG” link.  There you will find information on joining, a biography of the chapter, as well as upcoming runs and events.