Jesse James--American Outlaw (a book that I've been reading) 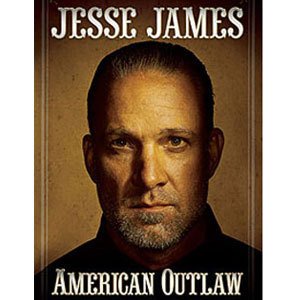 Love him or hate him, Jesse James is a prominent figure in the motorcycle industry as we know it. I want to make it clear that in no way am I "advocating" or "approving of" his actions, including his recent infidelity.  That being said, Lets' get into the book because I haven't been able to put it down since I purchased it a few days ago, and I'm more than half way through.  The book caught my interest because in 2010 I had an opportunity to sit down with Jesse and talk with him for my radio show.

I'm going to jump the gun a little bit.... a book report without finishing the book?  Sure, why not.  The epilogue of the book is him shielding his children from the press in the wake of splitting up with Sandra.  The press in California is relentless.  They stop at nothing to get pictures, including pictures of his innocent kids, which is a shame.  They had nothing to do with it.

Once his kids are dropped off at school, Jesse heads into Long Beach to try and lose the paparazzi.  Long Beach is a place he knows well.  It's where he grew up.  Long Beach, California has been made infamous by rappers like Snoop Dog, Dr. Dre, Warren G, and many more.

Jesse's life on Long Beach was far from easy.  His parents split at a young age.  His dad had a revolving door of step-moms who really didn't care for him.  He wasn't exactly the model son or model student.  He made his way though school by stealing and joyriding in cars to get around.  His dad made him work the swap meet on the weekend, and that is where Jesse got his knack for salesmanship.

Jesse's release was on the football field.  He was a large kid, making varsity in 10th grade.  And we're not talking 'just' making the team, we're talking starter for offense, defense, and special teams.  Football was good for him.  It got rid of a lot of his pent up energy.

Besides football his other love was for Harley-Davidson Motorcycles--and customizing them.  He even customized automobiles.  In fact during one of his disagreements with his dad, he moved in with his girlfriend and her parents while in high-school.  Of course he was given the rules of the house and for the most part he obeyed it.

He came home from a legitimate job at a furniture store doing delivery work and found his girlfriend cheating on him.   This was a turning point for Jesse.  Just when he though he had his head screwed on straight, he got knocked back down again.  A friend of his, who was a bad influence stole a whole bunch of camera equipment and didn't have a place to store it, so Jesse agreed to warehouse it and his friend turned on him and Jesse took the wrap because he was underage, and it wouldn't go on his record.

Unfortunately, it cost him several FULL RIDE scholarships to schools all over the country including the University of Pittsburgh.  No one wanted to have a thief on their team, and rightfully so.

The book goes on to talk about some more of his legitimate jobs, welding, fabricating and being a body guard.  In fact, he toured around the world with Danzing as their personal security.   It was when he saw a picture of a 50 year old roadie, that he realized this isn't what he wanted to do for a living.

He went on to work for Performance Machine and Boydd Cottington, the KING of custom and refurbished cars.  In his spare time, he made fenders out of his garage and soon found himself making more money on the fenders than working for the Hot Rod Shop.

At that point he decided to move on and start West Coast Choppers... gaining the attention of the Discovery Channel... and the Jesse James as we knew him at the turn of the century was born..

That's where I am in the book, and I"ll stop here.  Again, I don't condone most of his actions, however, he is a pop culture icon in the motorcycling industry and I think it's a story that needs to be told.  When I finish the book, I will do a "Part 2" blog, but I think we all know where it's going to end.
Posted by Rocky Marks at 11:39 AM No comments: